In this review we introduce Nokta Pointer. This affordable pinpointer made by the Turkish company has been on the market for several years already and has a good track record in treasure hunters community. The review has information about the device weight, its submergibility and reliability as well as if the device is worth its money.

In 2015 Nokta, the Turkish company introduced the upgraded version of its time-proven pinpointer – Nokta Pointer. The previous version was called Nokta Rs Pinpointer, while the name of the new device is Nokta Pointer.

Unlike its predecessor the new pinpointer has obtained bright and noticeable appearance, as well as some technological innovations were added. Though the device doesn’t offer some extraordinary functionality, this is a reliable and not expensive pinpointer for everyday use. 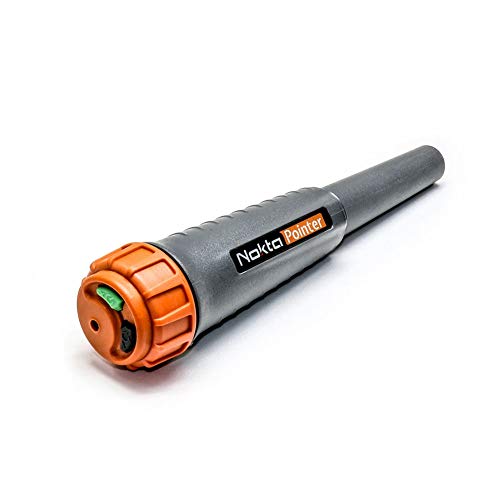 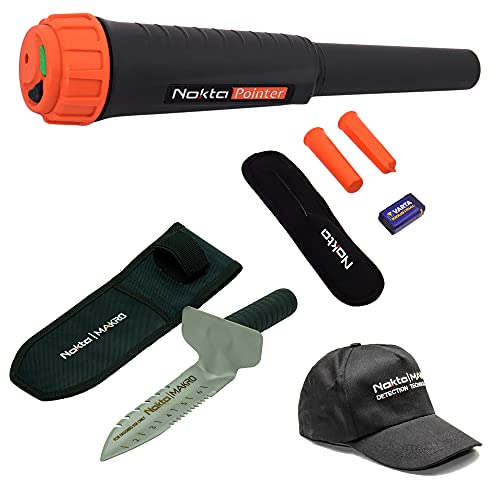 Bright colored pinpointers are trendy nowadays. However, the main color of Nokta Pointer is black. Though, orange cap of the battery holder and bright caps for the detection tip save the situation and they will significantly simplify the process of searching the device if you lose it.

Besides, for those who tend to forget about the pinpointer and leave it somewhere it has a lost alarm function. After 5 minutes of being inactive the Nokta Pointer pinpointer starts emitting audio alarm signals and the LED starts blinking, and in 5 minutes after this the device shuts off automatically.

The device uses one 9V battery as a power supply. The stated operation time of the device is about 30 hours.

The pinpointer has ergonomic shape, though some users may find location of the buttons on the battery holder cap inconvenient as well as the fact that it takes long to turn the device on/off (you should push and hold the button for couple of seconds).

Nokta Pointer is equipped with two replaceable hard-shell protection cases which are recommended to use on various soils. These are a standard protection case and a case with a scraping blade which you can use to dig the ground.

The pinpointer Nokta Pointer has 360° detection tip and by means of such circular magnetic field you can easily detect any metal object even if the target is located under, above or on the edge of this active zone.

When you turn off the pinpointer, it saves the last sensitivity level set.

Available alert modes: audio and vibration (they function separately). You can use any of the modes at your discretion:

The Nokta Pointer is equipped with a LED flashlight for treasure hunting at night or in case of working in some places with poor lighting. To turn the flashlight on you should push both buttons simultaneously.

The device has IP 67 protection class – it is dust- and waterproof and submergible up to 1 m deep. However, you can’t go underwater treasure hunting with this pinpointer (as you can do it with Garrett PRO-Pointer AT or Teknetics Tek-Point).

The Nokta Pointer has coil interference blocking function. Such a system excludes influence of the magnetic field created by the pinpointer on all devices working nearby.

This is a good pinpointer, but not the best one. Its main disadvantage is that the buttons are located on the battery holder cap, while the device advantage is its reliability and affordable price.

However, the above mentioned is not enough to compete with other pinpointers on this market, since each metal detector manufacturer produces its own pinpointer model (for example, Minelab Pro-Find 35), plus lots of Chinese copies of these devices on the market.