Not all diggers know that Minelab belongs to the Codan Limited group of companies, which publish a financial report and a presentation for investors every year. The financial year of 2021 has already begun in Codan, and it will end in July 2021, so the company has published its plans. Among them, you can find a plan to release a new metal detector for gold prospecting – Minelab GPX 6000.

The manufacturer provides details about its novelty gradually. Recently, all Minelab fans found out the good news that the metal detector will be collapsible and will fit any backpack due to this. Besides, among Minelab products, only Minelab Go-Find metal detectors were collapsible up to now. Of course, there is SDC 2300, which literally folds into a case, but it looks like a completely different thing when talking about GPX. Speaking by the attached video manual, this is the shaft of the device that will fold.

We expected to see a new GPX announcement on December 8, 2020, but recently this datehas been changed. The metal detector has to receive approval from FCC (FederalCommunications Commission), and there is some data posted by Minelab Electronics PtyLtd. on the official FCC site. According to this information, the product manual, schemes, listof the constituent parts, photos, etc., will be provided by the manufacturer on December 8,2020 However, then the date was shifted from December to February 9, 2021.

The main advantage of metal detectors of the GPX series is their significant detection depth and ability to work on any soil type, including the most challenging ones. The thing is that gold nuggets can be found in any soil type, and they are quite difficult to find with a metal detector.

Let me remind you that the first metal detector of the GP series appeared on sale in 2000. It was designed for gold prospecting and functioned based on MPS and DVT technologies. Then the GP series was substituted with GPX gone that uses the same technologies. This series contains metal detectors for gold nuggets such as GPX 4500, GPX 4800, GPX 5000.

The last one is GOLD MONSTER 1000, it appeared on the market in 2017 году, and it uses VLF technology, while all the previous devices used PI technology. That was an entry-level device for gold nuggets detecting, a simplified device model with a minimum of settings.

Here is the novelty. 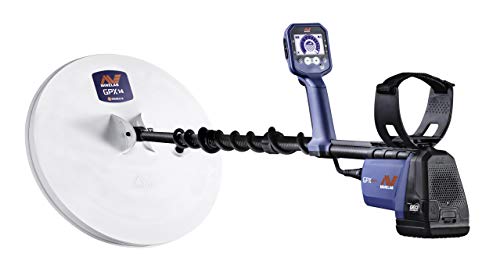 On June 30, 2020, Minelab has applied for registration of a new trademark GPX 6000, its release is planned for 2021. Unfortunately, there is no additional information from the manufacturer, and moreover, it seems that it is hiding it.

Thus we can assume from the device name that this new metal detector will have fewer functions (which will decrease its price as well) if compared with the Minelab GPZ 7000 model.

Therefore, it will be the second one in the product line.

The devices’ search coils are likely to be interchangeable.

The new metal detector is designed for the growing market of gold nuggets prospecting. And in this case, we are talking about Africa, since these were African gold miners who GOLD MONSTER 1000 was designed for.

As for the device appearance and technologies used, it will be the existing product line continuation with some new technologies added. This means that the metal detector will be quite heavy, with many accumulator batteries and interchangeable coils.

The device will function using PI technology. However, VLF is possible as well if it is really designed to be used in Africa. The thing is that local diggers are not quite good at using hi-tech devices, and PI technology is more complicated to master.

We’ll keep trying to contact the manufacturer representatives to get some comments concerning his new device and add them to the post (I doubt that we’ll succeed, though).