Here is Teknetics Alpha 2000 metal detector review. In this article you will find information about the device operating frequency, its searchcoil type, if headphones are included in the package set, how long the device can operate using one battery set and other peculiarities.

First Texas Products holding owns Teknetics brand since 1989. In addition, this holding is the owner of such metal detectors manufacturers as Fisher and Bounty Hunter.

Teknetics has several product lines of metal detectors. Each of them has devices with various functionalities and their prices are quite different as well.

Teknetics Alpha 2000 metal detector was announced on the marked at the end of 2008 together with Teknetics Delta 4000, Teknetics Gamma 6000 and Teknetics Omega 8500 models.

Teknetics Alpha 2000 is a metal detector of beginner level; it uses 7.8 kHz operating frequency. The device was assembled in the USA (not in China).

The idea “turn it on and go treasure hunting” is the main feature of the metal detector. A beginner detectorist would appreciate having a metal detector with high performance, which is easy to use and has quite simple settings. In case of this metal detector, all you need is to turn it on and start enjoying your hobby.

Let’s begin with the metal detector packing – it is more than simple – the device is put in a box without any decorations or some attractive pictures.

Inside the box you will find a control unit, s-shaped shaft with an armrest, two middle shaft sections, DD searchcoil, user’s manual in English, some ad’s from the manufacturer.

The manual is aimed at inexperienced detectorist. It starts with enumerating things, which you shouldn’t do with the device – for example, don’t turn it on inside the room. Then, you’ll find description of some technical terms such as – discrimination, device sensitivity, Notch.

The metal detector has S-shaped shaft. Its upper and middle sections are made of light weighted aluminum alloy and the bottom one is made of plastic. The middle and bottom shaft sections are colored with powder paint, so you don’t have to worry about scratches.

The shaft sections are connected with each other by means of two simple fixtures. First, you should fixate the sections using spring buttons and then apply swivel washer clamps to prevent any looseness. Such a fixation system has been used for many years for all metal detectors of beginner level.

There are 8 adjustment holes in the middle shaft section, using them you can always adjust the length of the shaft to your personal parameters.

The upper shaft has an armrest and a control unit attached to it. The latter is above the handler. You can shift the armrest along the shaft. There are some cushions inside the armrest and they embrace the user’s forearm to prevent looseness.

The device handle is made of polyurethane and it is rather large. Special properties of the coating don’t let the palm slide on the handle, no matter if you are wearing gloves or not.

Basic package set of Teknetics Alpha 2000 metal detector can include one of the two searchcoil types: Teknetics 8 inches or Teknetics 11 inches DD. More often, the device is sold with a concentric coil, but you may find some dealers that include a DD searchcoil in the device package set.

However, there is no point in getting this metal detector with a DD coil, since its price will be almost the same as that of Teknetics Delta 4000, while the device characteristics are significantly lower.

A concentric searchcoil is made using monolithic technology, so you don’t have to worry about its wholeness: both top and bottom of the coil have a wear proof plastic case that can easily stand hitting the ground, roots, etc.

The coil cable has an elastic braid and it is connected to the control unit via a special threaded jack-plug that eliminates chances that the jack unplugs during the search process.

To ensure reliable fitting of the cable to the shaft around which it is winded, a standard device package set includes two clips of touch fastener to fixate the cable properly and they will prevent the cable from waving and getting hooked on bushes, etc.

The coil is completely waterproof, so you can go beach hunting in shallow waters, streams or study roadside ditches and puddles. The main thing is not to get the control unit wet, the rest of the device you can submerge both into fresh and brackish water.

Teknetics Alpha 2000 uses 7.8 kHz operating frequency. The frequency was selected so that it is a compromise option which ensures proper detection depth and the device sensitivity to small targets.

Teknetics Alpha 2000 can operate using headphones, but they are not included into the standard device package set. The control unit has two headphone jacks – 1/8″ and the usual one – 1/4″ jack. That’s why any type of headphones will do, including common headphones you use to listen musing.

The metal detector has volume adjustment option (which is missing in Garrett ACE 250, for example). If option VOLUME (the signal volume) is active and highlighted, by means of buttons “+”, “-” you can change the volume of the sound signal. Minimal volume level is 0 – it is off, and maximal one is 9.

Battery holder is on back of the control unit. The device uses one 9V battery as a power supply, which is enough for at least 25 hours of continuous operation. If you are using headphones, it may be even 30 hours of the device operation.

You may use quality alcaline batteries or accumulators. The latter provide approximately 8 hours of continuous device operation.

The control unit has just four rubber buttons (power on/off, menu and ‘+’/’-‘ buttons). All the information is displayed on a large LCD. Everything is simple, convenient and self-explanatory.

The metal detector doesn’t have any bright colors in its design as some other models. So, it has a plain, but stylish appearance.

You can turn the device on/off by means of the central button on top, under it there is a MENU button, which helps to select the necessary menu item. Buttons «+» и «-» serve to change settings of some specific function.

There is a bar on the LCD left – this is a depth indicator (from 0 to 9), which is actually called signal intensity indicator. The value it gives is a ballpark figure.

On top, in the middle of the screen there is an icon to display the battery charge level. Under it you can see: “DISC” (discrimination function, which activates or deactivates sequentially all segments in the bottom scale of metals). “NOTCH” is a function that allows selective activation or deactivation of some specific target categories within the range of detectable ones; and there is a “VOLUME” button as well.

Actually, the metal detector has one search mode – discrimination mode with a filter. But the possibility of switching two or three tone sound signals and discrimination of various segments from the detection range allow the manufacture stating that the device has 5 search modes. By combining them a detectorist creates one of these 5 search programs.

Yes, the ground balance function of the metal detector is pre-set by the manufacturer. However, any inexperienced user can rely on this function completely.

If there is some electric noise, you have a chance to avoid its negative influence – you should decrease the device sensitivity level in this case.

At that, of course, the detection depth will decrease a bit, but the metal detector will have stable performance without any phantom signals.

Alpha 2000 doesn’t have a pinpoint function, this metal detector works only in dynamic mode, which means that you have to move the searchcoil constantly.

This is a bit inconvenient, but of the main properties of concentric coil is its high precision of target positioning. It will always be fixed in the middle if the searchcoil. 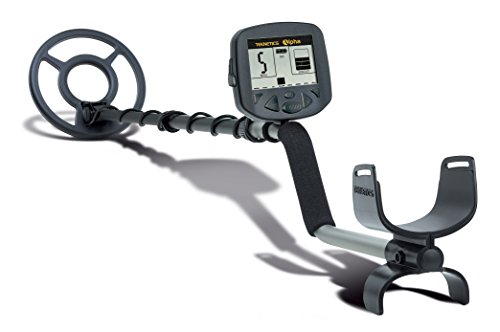 Теknеtiсs Alpha 2000 metal detector is a device that operates only in discriminator mode, i.e. excluding some groups of metal objects from the search coverage.

Discrimination scale is divided into certain number of segments. Each of them corresponds to some metal type with electrical conductivity peculiar to it. On the left there are iron objects with low conductivity. On the right, there are those with high conductivity (such as silver and copper coins have).

Not to waste time on digging foil and iron objects, it’s better to exclude such objects from the search coverage by means of buttons «+» and «-».

To avoid digging foil or iron you can also use functions “DISC” and/or “NOTCH” and exclude one or several segments using “+” and “-” buttons. While discrimination function “DISC” activates or deactivates sequentially all categories, “NOTCH” function allows doing this selectively or excluding some specific segments from the number of those that are active.

Teknetics Alpha 2000 metal detector is the one for beginner detectorists. It is easy to master; it has high visibility of its functions on the LCD and its characteristics are quite good as well.

However, the market niche of metal detectors for beginners is the one with high rivalry. There are many metal detectors which can be considered an alternative to this one.

First of all, we can name Teknetics Delta 4000, which is a bit more expensive, bit it has better functionality and characteristics. There is Garrett Ace 200 and Garrett Ace 250, Nokta Anfibio Multi, Bounty Hunter Land Ranger Pro, Fisher F22.

The choice will be quite tough here. I would consider mode popular models. First of all, they can be sold easier, in case you get tired of the hobby or decide to get a metal detector of higher level.

Scroll back to top